Aleppo, SANA-Years after its closure due to the terrorist war on Syria, National Museum of Aleppo opened its doors in front of visitors and archaeology scientists in a civilized ceremony which affirms the return of life to al-Shahba’a, Aleppo, to display more than 50 thousand pieces of its ancient treasury that represents live features of successive brilliant civilizations in the area.

“Re-opening the museum after 8 years of closure is considered as an announcement for the return of life to this cultural and international utility as it includes archaeological, rare belongings that represent the civilizations of al-Khabour valley, Euphrates, Idleb and Aleppo” Director General of Museums and Ruins said in a press statement. 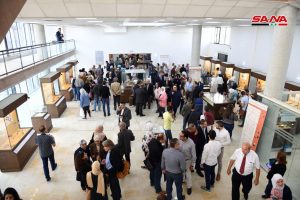 Aleppo National Museum with its human and cultural treasures and its archaeological value represents a unique witness on the progress of the Syrian cultures and civilizations throughout the Aramaic, Assyrian, Chaldean and Phoenician eras to be an icon taking us back to very ancient times.

The Museum is the most important of its kind on the international level due to what it showcases of archaeological finds as some of them date back to “Before Christ B.C” ages, in addition to displaying unique artworks by elite artists from Aleppo which qualified it to be classified as a regional museum.

In 1931, Aleppo Museum was established at a palace which was built in 1924, and when the building become unable to receive more archeological pieces due to its small size, the Archeology Department decided to establish a new building which is supplied with the modern conditions of museums as the old building was demolished and a new and modern museum was built in 1972.

Some of the archaeological pieces of Tal Halaf site, west of Ras al-Ayn city, which date back to the Neolithic, also known as the “New Stone Age” are the first items which have been exhibited at the Museum. 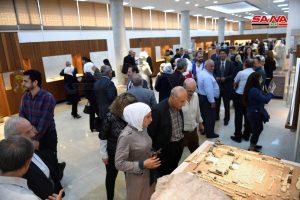 The entrance of the Museum was decorated with a copy of the royal palace facade which dates back to the 9th century B.C.

Visiting Aleppo National Museum, one can’t become dazzled when watching the magnificent exhibits in the five wings of the Museum as the showcased archaeological finds date back to certain historical eras that demonstrate the capabilities of the Syrian people who have mastered the arts of sculpturing, engraving and decoration.

No historian or archaeologist can reach an advanced level of science unless he visits this museum because it is considered one of the most important educational institutions in the field of archeology.

The Museum also embraces two internal yards which were established in 1974, and some huge basalt sculptures such as the statue Teshub ” Hurrian god of sky” and the statue of Hadad ” storm and rain god in the Canaanite and ancient Mesopotamian religions”, in addition to Hittite hieroglyphs from the first millennium BC.

The yards also include Roman statues and mosaic paintings dating back to the third century A.D. which represent hunting scenes while the external courtyard includes artifacts from various Assyrian, Roman, Byzantine and Arab Islamic periods, including a basalt stone representing two winged men in a movement around the moon and the sun, which was found in the Hittite temple in the Citadel of Aleppo and it dates back to the ninth century BC.

The courtyard also includes the statue of Arslan Tash which dates back to the 9th century or 8th centuries BC, and many other monuments.

Throughout the terrorist war launched against Syria, Aleppo Museum has went through huge material damages as it has been targeted with tens of rocket and mortar launchers by Takfiri terrorist organizations.

The building of the museum has suffered huge damages in different parts of its concrete ceiling and in its infrastructure and external doors and the offices of the employees and the rooms of the electricity generators and parts of the external fence were also destroyed.

Aleppo Museum will reopen on Friday after finishing the rehabilitation and maintenance process of its external garden, in addition to restoring a number of the archeological pieces which have been preserved in safe areas.

2019-10-24
ruaa-jazaeri
Share
Previous Kremlin:Priority is to the withdrawal of illegitimate foreign forces in Syria
Next SANA reporter in Hasaka: Popular demonstrations in Tal Halaf village in Ras al-Ayn against Turkish occupation forces which prevent the locals from returning to their homes Syria calls on the UN and the Security Council to condemn the Israeli aggressions, implement the relevant resolutions to end the occupation

Damascus, SANA- Syria called on once again the UN and the Security Council to issue …