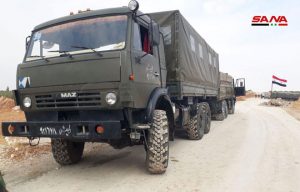 SANA’s camera accompanied an army unit during its deployment in the countryside of Manbej city.

In Raqqa countryside, SANA’s reporter said tens of military vehicles and their crews headed to the countryside of Raqqa and Hasaka province as part of the deployment operations in those areas.