Hasaka, SANA – The Turkish warplanes committed a new massacre against civilians and journalists in an airstrike that targeted a convoy in “Souq al-Mughlaq” marketplace in the city of Ras al-Ayn in Hasaka’s northwestern countryside.

Local sources said the airstrike claimed the lives of dozens of people, including foreign journalists.

A video surfaced showing tens of bodies and injured people, most of them having been mutilated and burned. 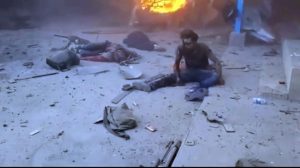