Damascus Fair Media Center: an integrated team that conveys a message from Damascus to the world Syrian-Indian Distinction Center for IT, new generation re-opened in Damascus Damascus, SANA- Media Center at Information Ministry pavilion has exerted huge efforts to cover events of Damascus International Fair which included direct broadcasting, photos, meetings and other media works that aimed to convey a message from “Damascus to the World”.

Information Minister Imad Sarah told SANA in a statement on Friday that about 125 local, Arab and foreign mass media took part in the coverage of the various activities of the Fair, including 42 media outlets which got visas, while 83 others were inside Syria, among them the national media, in addition to the accredited offices of the AP, AFP, Reuters and others. 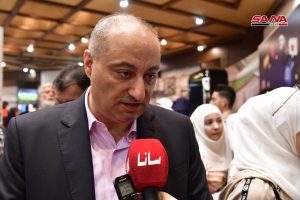 Minister Sarah pointed out that the Media center offered various services to the media institutions like free-high speed Internet and broadcasting via satellite.

He added that the image presented by the Syrian media through its broadcast articles and photos have refuted US attempts to minimize the participation in Damascus Fair.

For his part, SANA Director-general Abdul-Rahim Ahmad said SANA technical cadres have exerted remarkable efforts to provide the center with all equipment needed for the media coverage and to convey its message to the world.

Ahmad added that SANA media team has worked throughout the 10-day Fair as one integrated team.

center Integrated media team 2019-09-07
hala
Share
Previous More than 300.000 visitors to Damascus international fair on its last day
Next Military source: Army defense force yesterday evening confronted a terrorist attack attempt on a military post in al-Ghab valley as the attack was to be launched with three drones laden with bombs. Two of the drones were destroyed and the third was dropped and its ammunition dismantled without causing any casualties among personnel of the Syrian Arab Army