Chinese Ambassador: US threats will not deter Chinese companies from participating in Damascus international Fair Damascus, SANA-Ambassador of China in Damascus Feng Biao affirmed on Tuesday that the US threats to impose sanctions on the participants in Damascus International Fair will not deter the Chinese companies from taking part in the activities of the 61st edition of the Fair.

“Damascus international fair is considered as a source of power for the Syrian people and a window to develop Syria’s economy,” the ambassador told SANA in an interview, adding that 58 Chinese companies will take part in the fair this year on an area of 380 m2. 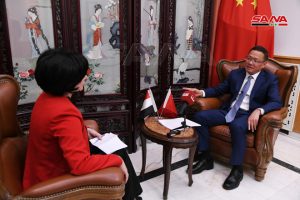 He underlined that the companies which will participate in the fair have different specializations that differ between the equipment and substances of reconstruction, engines, decoration, electricity, technology, cars, medicine and solar system.

The Ambassador went on to say that his country continues to offer scholarships to Syrian students and assistances to alleviate the suffering of the Syrian people that reached at nearly 800 million Yuan.

He renewed his country’s support to Syria in the fight against terrorism and finding a solution to the crisis  in Syria, asserting his country’s participation in the reconstruction process.

The Chinese ambassador clarified that the volume of trade exchange between the two countries reached nearly 1,27 billion USD that equals half of the exchange before the outbreak of the crisis.

2019-08-27
m.eyon
Share
Previous Russian President Vladimir Putin during press conference with Erdogan: It is necessary to eliminate terrorism hotbeds in Idleb and other areas in Syria
Next The army strikes dens of terrorists in Idleb , confronts attack in eastern countryside