Damascus, SANA – Syrian Arab Red Crescent (SARC) volunteer Masoun al-Rifaie was awarded the Florence Nightingale Medal, the highest medal given to nurses for their bravery and dedication to their work. 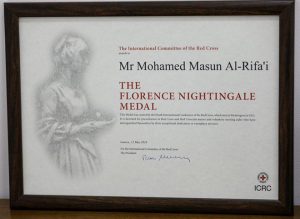 In a statement on Monday, SARC said that it nominated al-Rifaie from its branch in Homs because he has been a very active and effective paramedic during the crisis, and as a token of appreciation for his efforts and sacrifices.

Al-Rifaie was presented with the medal by President of SARC Khaled Hboubati and Philip Spoerri, the head of the International Committee of the Red Cross (ICRC) mission in Syria.