First National Conference for Housing kicks off in Damascus Damascus, SANA-The first national conference for Housing started its activities on Saturday under the title “the national strategy for housing in Syria” in the presence of Prime Minister Imad Khamis. 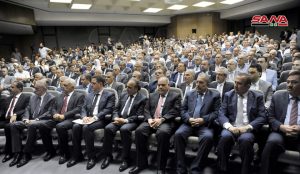 “Syria confronts the hostile plot on two basic strategies; the first depends on foiling the western blockade with all its forms, and the second stipulates continuing the steps of arousing the powers and capabilities of the national economy, and preparing the administrative and legislative environment to launch the reconstruction process, Khamis said in a speech to the conference.

“The government is working to analyze the current situation in order to set an integral national strategy allowing the country to enter the reconstruction stage according to scientific visions “. Khamis continued to say.

“The main access of the national housing strategy is based on the development of housing laws and the work of real estate development companies to broaden their participation in investment,” he added.

For his part, the Minister of Public Works and Housing, Souheil Abdullatif, said that work in the housing sector is participatory ,clarifying that participation between specialists or civil society and government bodies and the private sector is the starting point for a national strategy.

The conference  discusses many topics related to housing, reconstruction and financing.