Damascus, SANA – The Venezuelan Cultural Week kicked off on Monday at Dar al-Assad for Culture and Arts, organized by the Culture Ministry and the Venezuelan Embassy. 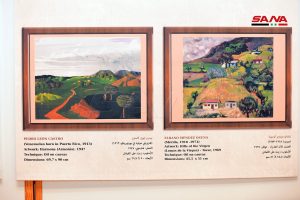 The activities began by opening an exhibition featuring copies of works by 34 Venezuelan artists whose original works are preserved at the Contemporary Art Museum in Caracas, with most of the paintings depicting natural scenes and the cities and towns of Venezuela.

The event also features a cinema festival which will continue until Thursday, showcasing a variety of movies produced by Villa Del Cine.

The opening ceremony included a screening of the short film Colmillo by director Albi De Abreu, which focuses on the themes of loneliness and the friendship between humans and animals.