Damascus, SANA – Speaker of the People’s Assembly Hammoudeh Sabbagh on Monday received Hossein Amir Abdollahian, Assistant Speaker for International Affairs at Iran’s Shura Council, and the accompanying delegation, discussing with them means to enhance parliamentary relations between the two countries. 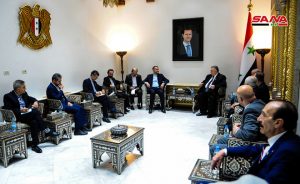 Sabbagh voiced appreciation for the Iranian leadership and government’s support for the Syrian people, asserting that Syria supports Iran in confronting US threats.

The Speaker said that Syrian-Iranian relations are strong, pointing out to the coordination between MPs from both countries.

For his part, Abdollahian underlined the role of MPs in revitalizing trade exchange and economic relations, asserting that Iran will exert all possible efforts to support Syria on the political and economic levels. 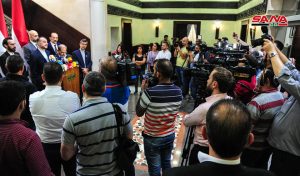 In a statement to journalists after the meeting, Abdollahian said that Syria is now entering a new stage, and that the matter of terrorists in Idleb will be resolved.

He also stressed the need to focus on tourism and exchange visits by businessmen to develop economic cooperation and confront sanctions imposed on the two countries.