Countryside of Damascus and Homs, SANA-New batches of displaced Syrians on Thursday returned from the Lebanese territories through al-Zamrani ,Jdeidet Yabous and al-Dabbousyia border crossings in the countryside of Damascus and Homs in framework of the joint efforts exerted by the Syrian state in cooperation with the Lebanese side for facilitating the return of the displaced to their towns and villages which had been liberated from terrorism.

SANA’s correspondents at the three border crossings said that the governmental institutions had prepared the processes of receiving the displaced and providing the required facilitations and buses to transport them to their villages and towns which had been liberated from terrorism by the Syrian Arab Army.

At al-Dabbousyia border crossing, SANA correspondent said that a batch of displaced arrived in the crossing coming from Lebanon as they were received by medical teams and staffs affiliated to Homs Health Directorate as the vaccines and the required health services were provided to the displaced and their children upon arrival in the crossing.

Meanwhile, SANA correspondent at al-Zamrani border crossing in Damascus Countryside said that a number of cars and trucks with displaced Syrians and their luggage on board arrived in the crossing as all the required assistance was provided to them before heading for their villages and towns which had been liberated from terrorism.

SANA’s correspondent at Jdeidet Yabous crossing said that a number of buses carrying hundreds of displaced Syrians who are returning from Lebanon arrived in the crossing.

The returnees expressed happiness to return to the homeland after years of displacement, saluting the Syrian Arab Army which has fought against terrorism and triumphed over it and thanks to its sacrifices, they are today returning to their villages and towns. 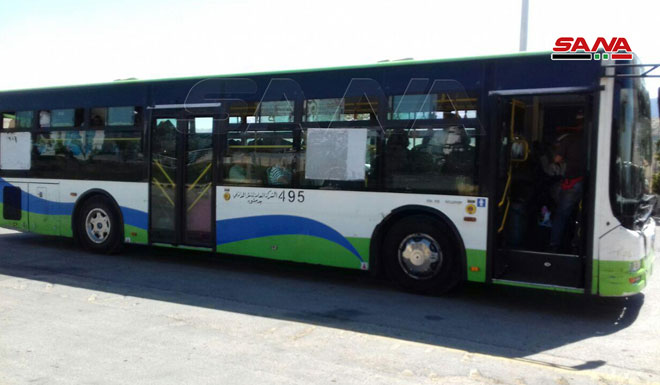