Damascus, SANA – Activities of the second year of the “Together it Will Return More Beautiful” national volunteer campaign kicked off on Friday at the northern entrance of Damascus city. 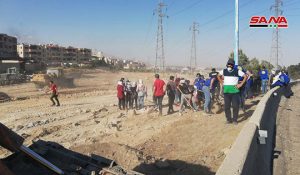 The campaign, which aims to restore vitality in the areas affected by terrorism, is carried out by a number of official establishments, including the National Union of Syrian students, the Revolution Youth Union, the Syria Trust for Development, the Ecumenical Relations Department, St. Ephrem Patriarchal Development Committee, and Syria Youth Fingerprint foundation.

He said this year’s activities will be expanded to help local communities restore and rehabilitate areas damaged by terrorism in Damascus, its countryside, Aleppo, Homs, and Hama.

Al-Aroub said the first of the activities involves renovating 7 kilometers of the northern highway leading to Damascus, and that volunteers have begun removing rubble and waste and repairing sidewalks and dividers.

Together it Will Return More Beautiful volunteer volunteer campaign volunteer work 2019-07-06
Hazem al-Sabbagh
Share
Previous Harvest of wheat and barley crops
Next Darroch : Trump “inept”, “incompetent” and his “career could end in disgrace”