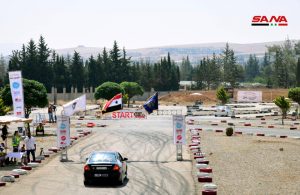 In the speed competitions, veteran racer Anas Qawadri came in first with a time of 1:19.62 minutes, followed by Baho Elias from Lebanon with 1:24.86, and Aysar Abu Hamdan with 1:34.27 in the special production category.

In the drift competitions, Amr Hamsho came in first, beating Mohammad Krezan with a single point, and Ahmad Hamsho who came in third with four points.