Damascus, SANA – The Asia-Pacific Informatics Olympiad 2019 competitions, organized by Russia, were held on Saturday, with students from 40 countries including participating online.

The Syrian team consisted of 27 students who participated from 4 centers in Damascus, Homs, Lattakia, and Aleppo, with the competitions lasting for five consecutive hours held online simultaneously in all participating states. 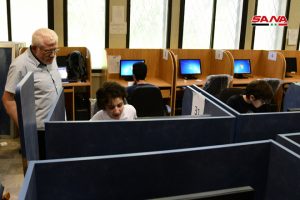 Member of the Syrian Science Olympiad central scientific committee Ammar Nahhas said the competition involves a series a problems that require a high level of analytical and logical thinking in algorithms and coding, with each problem being a real-life situation for which the student must choose or devise an algorithm to resolve it, with some problems requiring up to five or six algorithms.

Nahhas said the results should come out with in the next few days, noting that this Olympiad includes students from countries renowned for their IT capabilities, such as Japan, Australia, China, and Russia, which makes it a good opportunity for Syrian students to compete with the best of their counterparts from those countries and find out how they compare to them.

The Asia-Pacific Informatics Olympiad helps students prepare for the 2019 International Olympiad in Informatics which will be organized by Azerbaijan in July.