That was during a festival entitled” Spring of Childhood” held Thursday by the Syriac Mar Afram body, in cooperation with the United Nations Children’s Fund (UNICEF). 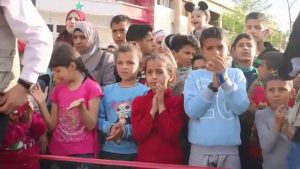 Children participants were pleased with the organization of this activity and expressed their solidarity with the children of the occupied Syrian Golan which will be liberated from the Zionist occupation as the city of Deir Ezzor was freed from terrorism.