Gen. Ayoub: We will regain control over every inch of our territory During the meeting, the three sides made a comprehensive evaluation of the strategic achievements gained in the domain of combating terrorism during the last period and the overall relations that connect the Syrian army with the two friendly armies.

Gen. Ayoub said  that Syria does not compromise when it comes to its right to defend its sovereignty, and that it will regain control over every inch of its territory.

Ayoub said that these meetings are important and productive on various levels, and their results will help to continue facing challenges, dangers, and threats posed by the spread of Takfiri terrorism in the this vital area of the world. 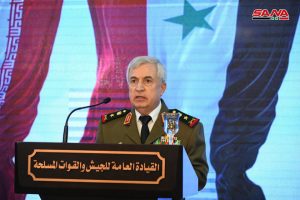 “We do not compromise when it comes to our right to defend its sovereignty,” Ayoub stressed, asserting that the Syrian state will regain control over every inch of its territory either through reconciliations or military force, adding that Idleb is no exception, as it is one of the four de-escalation zones which were specified, while the other three are back under the control of the Syrian state, and the same will happen to Idleb.

The Defense Minister stressed that any military presence by any state without a Syrian invitation is an occupation, and Syria has the right to defend its national security and sovereignty, and this is recognized by international laws and conventions.

The preservation of the geographic and demographic unity of the Syrian state is not negotiable or debatable, he said

He noted that the SDF is the last remaining card held by the US troops, and Syria will deal with them either through reconciliations or by liberating the land.

Regarding Israeli attacks, Ayoub said “We are dealing efficiently and professionally with all Israeli attacks, and most of the hostile missiles are shot down,” noting that the Israeli attacks seek to raise the flagging morale of the terrorists who carry out an Israeli agenda.

“It is unwise for us to be drawn into a planned and calculated war by the enemy which chose a time and place according to its military strategy; what is wise is to strike hard the terrorists, who are its agents inside,” he added.

“Our choice is to live as Syrians with each other forever according to our will and not the will of others,” Ayoub said.

For his part, Bagheri voiced his country’s readiness to help fight terrorism, because terrorists pose a threat to Iran as well. 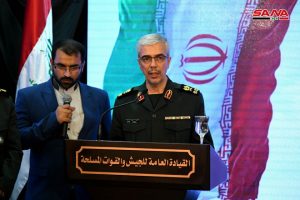 He emphasized the necessity of respecting the Syrian state’s sovereignty and its territorial integrity, stressing that no country should enter it illegally.

In turn, al-Ghanimi said that the security of the borders between Syria and Iraq is very important,  and it is controlled by the Iraqi security forces and the Syrian Arab Army, pointing out to the high level of coordination with the Syrian Arab Army regarding fighting Deash terrorists. 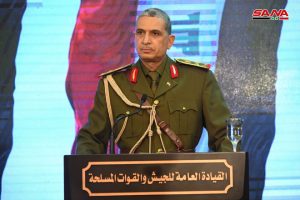 He said that security of Iraq is an integral part of Syria’s security, and coordination will continue through  the information center  which was established .

Al-Ghanimi said the coming days will witness opening the borders crossing  between Syria and Iraq.

The Iranian and Iraqi military delegations arrived in Damascus on an official visit to Syria by an invitation from Gen. Ayoub.