SARC, ADRA to cooperate to rehabilitate damaged houses and schools in Tadmur Homs, SANA – The Syrian Arab Red Crescent (SARC) and the Adventist Development and Relief Agency International (ADRA) reached an agreement for rehabilitating houses and schools damaged by terrorism in the city of Tadmur (Palmyra). 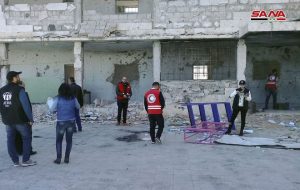 Chairman of Tadmur City Council Hani Da’as said that after examining the destruction caused by Daesh (ISIS) terrorists in the city, an agreement was reached with ADRA to repair houses and schools, as well as clearing debris and waste and spraying pesticides in the city.

Da’as added that a temporary housing center for displaced people currently staying at al-Rukban camp will be set up in al-Tanf area to house them until their damaged homes in the city are repaired.