Damascus, SANA-Syrian and Abkhazian Olympic committees signed on Sunday a cooperation agreement in Damascus on exchanging sport camps and courses. 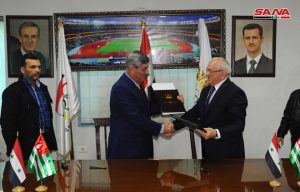 “Articles of the agreement stipulate for exchanging training sport camps and course in different games of the Syrian and Abkhazian clubs and national teams,” President of the National Olympic Committee of Abkhazia Valery Arshba said in a press statement.

He described the level of the Syrian sport as good, saying ” I felt that during my visit to a number of Syrian sports establishments.

Muwafak Joma’a, Head of Syrian Sports Federation, for his part, said the agreement will be directly translated through exchanging expertise and holding joint camps and courses.