During the meeting, Mikdad reviewed the latest developments related to the crisis in Syria, thanking China’s leadership and people for their support for Syria, expressing gratitude for China’s positions at the Security Country by using veto to thwart Western resolutions that targeted Syria’s sovereignty, independence, and unity. 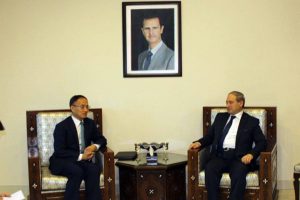 The Deputy Minister lauded the humanitarian aid provided by China to Syria to help Syrians overcome the economic sanctions imposed by the US and its allies.

Mikdad stressed the importance of improving bilateral relations and realize President Bashar al-Assad’s vision of heading eastwards in all fields.

The two sides discussed a number of practical steps the two sides can look into to achieve this goal.

For his part, Chen said his visit to Syria asserts the importance of Sino-Syrian relations, noting that Syria was among the first countries in the region to establish relations with China.

He also noted that Syria is the only country for which China used the right of veto six times at the Security Council.

The Assistant Minister praised the achievements of the Syrian state in its war on terrorism and the cooperation between the two countries in this regard, asserting that these achievements were realized thanks to the wise leadership of President Bashar al-Assad and President Xi Jinping.