Daraa, SANA-Archaeological citadel of Bosra witnessed a varied art activity which was held on its amphitheater after 7 years of absence in an initiative that is described as a new hope to restore normal life to the city. 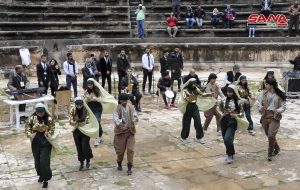 The event, which was held on the archaeological amphitheater, included various songs, music pieces of Houran heritage and national dances.

Director of “Tasamouh and Ata’a” music band, Abeer Asa’ad told SANA that the band reactivates the cultural heritage in Syria in general, and in Houran in particular, adding that the band’s plays on Bosra archaeological amphitheater affirms that the glorious city is gradually recovering after the Syrian army had expelled terrorism from the region. 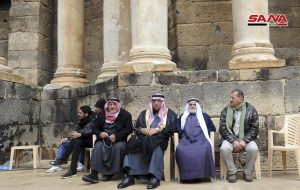 She considered that the return of culture and art activities to the city encourages people from inside and outside the area to visit it.

Bosra famous amphitheater is registered on the world heritage record.