Lattakia, SANA_ Natural silk industry is one of the most important images of coastal natural heritage where mulberry-trees are the sole source of food for the silk worm.

Natural silk industry in Syria is an inherited profession that has undergone changes led to its decline with the emergence of synthetic silk which conquered the markets and became a strong competitor to natural silk as well as the excessive cutting of mulberry trees, which are the main source of food for the larva, especially in the Syrian coast.

In the face of these changes, the Syrian government in 2017 launched a development project to preserve this ancient traditional profession.

It worked to expand the area planted with mulberry-trees and increase financial support to reach 2000 SP per kilo of cocoons instead of 300 SP. This development project will be applied over five years  and it will start in Lattakia. 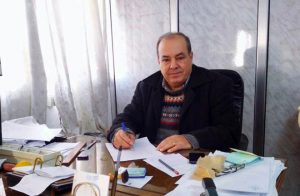 “By the end of 2016, we managed to collect 35 boxes of eggs,  each one contains 20,000 eggs, through silk breeders and technicians of the project in Wadi Qandil center to be put in previously prepared  special room to provide ideal conditions for a successful hatching process which takes 10 to 15 days, ” head of the Bee Breading and Silk Department at the Agriculture Directorate of Lattakia Rayan Moalla said.

The process starts by breeding silkworms and taking care of them. It is necessary to protect them from insects, birds and rodents, high heat or extreme cold and other factors that affect their lives or their production.

Moalla added that the silkworm cultivation is of economic utility, clarifying that each eggs box needs approximately 500 to 600 kg of mulberry leaves during its life cycle and an area of up to 20 square meters.

He pointed out that the silk department is responsible for guiding the farmers on how to take care of the silkworm and keeps in touch with them to follow up their work of and provides them with consultations by phone or through field visits if necessary .

Moalla attributed the diseases affect the silkworm to negligence of the breeders mainly. Silkworms should be kept away from each other and away from the air and water because the density and contact cause fungal diseases as their skin is very thin and that will lead to the damage of the production. 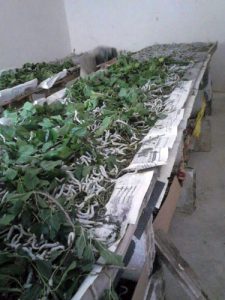 He pointed  that 10 dunums were allocated in al-Hanadi nursery for planting  5,000 mulberry-trees during 2018 as there are previously planted 5 dunums in Wadi Qandil.

Moalla noted that these projects provide thousands of job opportunities with high income, where requirements for the establishment of silkworm project is limited to 8 to 10 large mulberry-trees and a well-equipped permanent room and a box of eggs.

There are two types of silk white and yellow according to the strain.

In Syria, the yellow strain has become extinct as natural silk is the basis of the fabric of brocars, damasko and agpani fabrics, which Syria was famous of throughout history

Despite the decline in the silk industry, it returned to become popular in all traditional fairs and exhibitions taking place in the city of Lattakia and other Syrian cities.