Damascus, SANA- Minister of Local Administration and Environment Hussein Makhlouf discussed on Monday with Lebanese State Minister for Refugee Affairs Saleh al-Gharib means of ensuring the return of the displaced Syrians in Lebanon to their homeland. 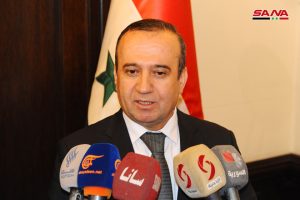 Speaking to journalists following the meeting, Makhlouf said that the Syrian state has taken all the necessary procedures for the return of the displaced to their cities and villages, in addition to securing their needs and facilitating the process of granting the necessary documents.

He indicated that both Syria and Lebanon have a common will to complete the return of all the displaced Syrians to their homeland in the upcoming period, adding that some parties which support terrorism are hindering the return of the displaced as they do not want to acknowledge the victory of the Syrian state.

For his part, al-Gharib  said that the Syrian government sees that preventing the displaced Syrians from returning to their homeland is a project aimed at “undermining Syria’s victory”, pointing out the lack of accurate statistics regarding the numbers of displaced Syrians in Lebanon.