Homs, SANA The competent authorities  on Thursday discovered a mass grave containing the bodies of a number of military and civilian martyrs, in al-Ameriya area in the vicinity of Palmyra.

The martyrs, kids included, were executed by Daesh (ISIS) terrorists when they were seizing the area.

In a statement to the SANA reporter in Palmyra, Palmyra Police Chief, Gen.  Haider Haidar, said that while securing the areas cleared of the terrorist organizations by the Syrian army, the competent authorities discovered bodies of a number of martyrs who had been killed by Daesh before they were defeated by the Syrian Army. 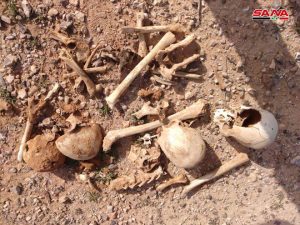 Gen. Haider added that bodies of the martyrs were transported to the specialized hospitals for taking all legal procedures to identify their names  in order to hand their bodies over to their families.

On March 2017, the Syrian Arab army regained control over Palmyra city, inflicting heavy losses upon Daesh terrorist organization in the personnel and equipment.

discovered grave kids included martyrs mass Palmyra 2019-01-24
ghossoun
Share
Previous King of Cambodia accepts credentials of Mustafa as non-resident Ambassador from Syria to his country
Next Material damage due to blast of explosive device planted by terrorists to car in al-Adawi neighborhood, Damascus