Under the patronage of Mrs. Asma al-Assad, winners of Syrian Science Olympiad honored Damascus, SANA – Under the patronage of Mrs. Asma al-Assad, the Distinction and Creativity Commission on Sunday honored the winners of the top ten positions in the Syrian Science Olympiad competitions for the 2018-2019 season in math, physics, chemistry, IT, and biology, in a ceremony held at Dar al-Assad for Culture and Arts.

The top ten students in each subject were crowned with laurel wreaths, while the top three students received gold, silver, and bronze medals. 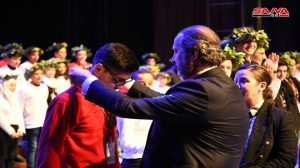 Director of the Syrian Science Olympiad Ali Abu Khedr said since its inception, the Olympiad proved to be an advanced projects for building new methodology for thinking and developing the skills of self-education, research, and positive competition.

In statements to SANA, the students who won the first places voiced happiness over the results they achieved, thanking President al-Assad and Mrs. Al-Assad for the care they provided during the stages of the competitions.

Ali Bakkour, who came in first in math, said that participating in the Olympiad developed his methods of thinking and understanding, giving him experience that helps him deal with everyday life, while David Doakmajian who was first in biology said the Olympiad is different from traditional education methods, and that students must believe in themselves and follow their passion to find their true scientific inclinations. 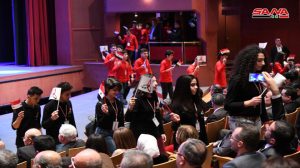 Abdulrahman Ahdali, who came in first in IT, said the Olympiad is an important scientific and social opportunity for students to showcase and explore their talents and capabilities, while Abdulaziz Jarbi who came in first in physics said the Olympiad is a chance for students to assess their knowledge in the fields they love and test their intelligence so that they can develop themselves.

Meanwhile, Anas Abbas said winning the first place in chemistry will motivate him to work harder and achieve his dreams in the scientific field he loves.