Recon drone, weapons and shells left behind by terrorists found in Daraa Daraa, SANA- While combing the areas liberated from terrorism in the farms of Daraa al-Balad area, the authorities found a remote-controlled (RC) reconnaissance drone, weapons and shells, some of which are Western-made, that had been left behind by terrorist organizations.

SANA’s reporter in Daraa said while following up the process of securing the areas liberated from terrorism by the Syrian Arab Army,  the authorities found a reconnaissance drone, in addition to an amount of weapons and ammunition, some of which are Western-made, in the farms surrounding Daraa al-Balad area. 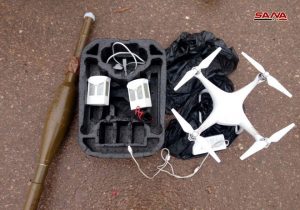 The reporter added that among the seized weapons were  PKC machineguns, assault rifles, RPG launchers and a large number of their shells, and a huge amount of varied ammunition, homemade rocket shells, military night telescope and satellite telecommunication devices.

The authorities and army units operating in Daraa, in cooperation with the locals, continue to comb residential areas and their surroundings and the neighborhoods in Daraa which have been liberated by the army to remove the explosive device, car bombs and mines left behind by terrorists to preserve the lives of civilians and to pave the way for completing the return of all locals to their homes.