Homs, SANA – The invention of smart glasses for the blind was a distinctive project submitted by a group of students from Faculty of Mechanical and Electrical Engineering at al-Baath University in Homs at Al-Bassel Fair for Innovation and Invention 2018.

The invention is an applied study of smart glasses for identifying objects and pronouncing their names in Arabic to help the blind.

Majdi Skaf, Yara al-Fayad, and Bayan al-Mari are the creators of this invention, which uses AI networks.

Speaking to SANA, Skaf said that the fact that this project is based on AI networks makes the idea the first of its kind in Syria, unlike previous attempts that relied on large databases.

He pointed out that using AI networks yields distinctive results and has low costs, and it also doesn’t burden the inventors with long hours of programming. 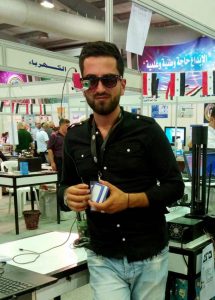 According to Skaf, the tools used in the manufacture of these glasses are a microprocessor, a 5-megapixel lens, a button to alert the processor, and a 16GB memory card.

He said the glasses work by pressing the button as a command for the camera to take a snapshot from the live feed it is viewing continuously, then the snapshot is sent to an image reverse-search engine to be identified, and a corresponding audio file is recalled from the files prepared in advance on the memory card using Google’s text to speech feature, thereby producing audio output in Arabic identifying the object captured by the glasses.

Skaf pointed out that in the future, these glasses can be programmed to suit the objects in the user’s personal environment, such as being calibrated to identify some of the user’s immediate acquaintances and pronounce their names as soon as they see them.

He added that in the future, the glasses’ appearance can be improved to look better, and smaller electronic components could be used and integrated into the frame of the glasses.

2018-10-16
Manar
Share
Previous El-Sisi: There is no alternative to finding a political solution for crisis in Syria
Next Syria, Crimea adopt steps to enhance bilateral relations