14 health centers and a hospital rehabilitated in Ghouta and Qalamoun, health official says In statements to SANa, Naanous said the centers have been equipped with a medical team and equipment to provide optimal health services for patients and locals who have returned to their areas after their liberation from terrorism. 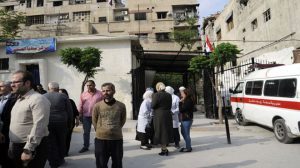 2018-08-19
Manal
Share
Previous Syria’s Olympic football team qualifies for 16th round of Asian Games
Next Bogdanov: Consultations on holding a summit for presidents of Russia, France, Turkey and German Chancellor on Syria