Book Fair on July 31, an evidence on recovery of cultural movement which had been severely affected by terrorist war on Syria New book by Czech writer on Queen Zenobia of Palmyra Damascus, SANA – We are just one day away from the inauguration of the 30th edition of the Book Fair which will run from July 31 until August 11 at al-Assad National Library with the participation of 200 local, Arab and foreign publishing houses.

700 titles covering different branches of knowledge, in addition to children’s books, scientific studies and researches, novels, stories and poetry books will be exhibited at the Syrian Establishment of Publications Distribution’s pavilion.

Leading local companies are participating in the event include the Syrian Establishment of Publications Distribution, Soryana Media, Seen, al-Haitham, A’qel and al-Hafez publishing houses among many others.

Director of the Syrian Establishment of Publications Distribution, Adam Mohammed, said that the shadows of terrorist war cast over the cultural movement in Syria, hoping that Syria would restore its position as a cultural hub which provides a space for creativity.

The Arab Advertising Organization has launched a wide promotional advertising campaign as part of the ongoing preparations for the fair, in addition to setting up an integrated advertising program across different public and private media outlets.

In a similar context, Ministry of Culture has announced the cultural activities and events accompanying the fair. 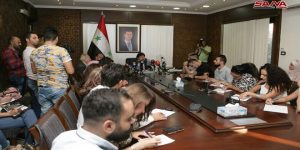 Culture Minister, Mohammed al-Ahmed, noted that this year’s edition is held amid a state of security and stability which would not be possible without the victories and sacrifices made by the Syrian Arab army.

All books will be entitled to a 40% discount in order to be accessible to all people and voracious readers, said the minister, adding that the accompanying cultural program includes a film festival with the aim of introducing the latest films produced by the General Establishment of Cinema, in addition to selecting al-Farabi as the famous historical figure to be brought into the spotlight.

He said that the fair sets a clear evidence on the recovery of cultural movement in Syria which had been severely affected by the terrorist war waged on the country.

Annual book fair July 31 kicks off 2018-07-30
ghossoun
Share
Previous Tenth round of Astana talks held in Russian city of Sochi starts with participation of the Syrian Arab Republic delegation headed by Dr. Bashar al-Jaafari and the other delegations
Next Syrian student ranked 3rd at UCMAS Competition