Hassoun: Syria will not forget Russia standing by it in fighting terrorism Russian-British talks on combating terrorism and situation in Syria

Damascus, SANA-The Republic’s Grand Mufti Ahmad Bader Eddin Hassoun said that Syria triumphed over terrorism and will not forget those who have stood by it in the fight against terrorism, foremost among them are the Russian people.

Hassoun’s remarks came during a meeting with a Russian parliamentary delegation headed by MP Dmitry Sablin on Wednesday. 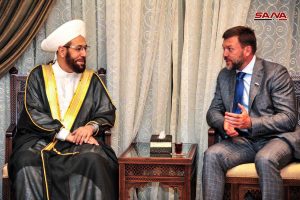 Hassoun said that Russia has stood by Syria and its people, hailing the sacrifices of the Russians whose “blood mingled with the Syrians’ in combating terrorism during the terrorist war on Syria.”

The Grand Mufti warned against a spread of extremist ideology and terrorist ideas to the Russian mosques, mainly that the Saudi money is still flowing to that end.

For his part, Sablin reiterated his country’s support for the Syrian people in combating terrorism and resolving the crisis in the country.