Health Ministry: 692 confirmed infections, 40 fatalities due to Cholera in Syria

Geneva, SANA – Health Minister Dr. Nizar Yazigi said that the health sector in Syria continued to provide all that is needed to preserve public health despite the challenges caused by the unjust war on Syria and terrorist attacks on medical establishments and staff.

In a speech at the 71st World Health Assembly at the UN HQ in Geneva, Yazigi said that the Ministry succeeded in preventing the spread of diseases and epidemics through stringent measures on the national level. 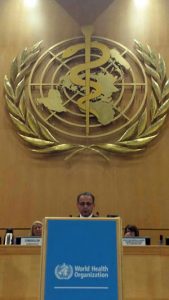 He noted that Syrian health establishments continue to provide free medical services, which numbered over 40 million services in 2017 at an estimated cost of SYP 81 billion, with emphasis on enhancing the strategic reserves of medicine and vaccines.

Yazigi said that the Ministry worked to rehabilitee health establishments damaged by terrorism along with opening new health centers and providing 32 new ambulances and mobile clinics.

The Minister said that there was an improvement in locally-made medicine’s rate of covering the local market’s needs, reiterating calls for lifting the unilateral sanctions on Syria as they have an adverse effect on citizens’ health.

Regarding the health situation in the occupied Syrian Golan, Yazigi said that despite Syria’s recurring demands for building health establishments in the villages of the occupied Golan, the Israeli occupation is deliberately preventing such establishments from being available as a method of putting pressure on locals and displacing them.

He also pointed out to the suffering of Syrian captives in the Israeli occupation’s jails which lack the minimum degree of hygiene and healthcare standards.

One the sideline of the Assembly, Minister Yazigi met Belarusian counterpart, Dr. Valery Malashko, discussing with him means of enhancing cooperation in the field of medicine and pharmaceuticals, and the possibility of establishing a joint pharmaceutical factory.