The Jordanian industrialists and tradesmen focused on ways of cooperation to overcome the difficulties in developing trade exchange and reopening border crossings between the two countries. 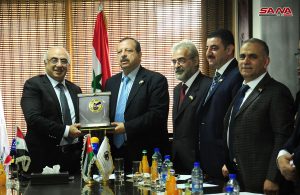 The two sides also tackled means of facilitating the flow of products, simplifying visa procedures for Syrian businessmen to Jordan and bank transfers between the two countries, as well as signing memorandums of understanding.

Head of Jordanian delegation, Adnan Abu Ragheb, stated that reactivating trade and industrial cooperation between Syria and Jordan are so important and his country is looking for establishing joint projects, exchanging experiences and boosting cooperation. 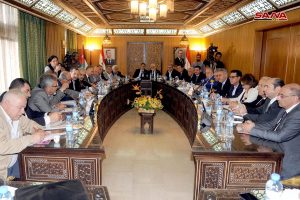 Head of Damascus Chamber of Industry, Samer Al-dibs, stressed the importance of signing memorandums of understanding to push forward trade and industrial ties and reach effective results to serve the two countries’ interests.

In a similar meeting at Damascus Chamber of Commerce, secretary general of the Chamber, Muhammad Hamsho, also concentrated on the importance of enhancing trade relations and increasing trading volume between Syria and Jordan .

Chamber of Commerce Damascus Chamber of Industry Jordan Jordan’s Chamber of Industry Syria and Jordan trade and industrial ties 2018-05-08
Emy
Share
Previous Made in Syria Expo to kick off in Benghazi of Libya in current May
Next A civilian martyred, two others injured in terrorist explosive device blast in Quneitra