Damascus, SANA – Second largest mosaic picture in Syria was uncovered in the northern part of the country in the framework of the excavation works carried out in Uqeirbat archeological site in Hama Province.

The gigantic stone picture is 450 square meters according to the Directorate-General for Antiquities and Museums (DGAM), which makes it the second largest mosaic after Tayebt al-Imam’s stone picture-also in Hama Province. 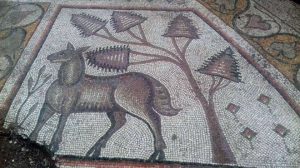 The picture is part of a church ground that dates back to the fifth century AD and it was made of small cubic stones of different colors to depict the scenes that contain religious concepts, according to DGAM director Mahmoud Hamoud.

“The scenes show a variety of rare geometric, vegetative and animal forms with known religious connotations, including peacocks, hippos, terrestrial pigeons, sheep and deer, as well as the life-tree scenes of fertility and renewability,” said Dr. Hamoud. 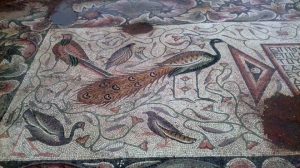 The mosaic contains 14 written texts in the Greek language placed within geometric frameworks in which the names of people who financed the picture were mentioned.

The church’s building where the mosaic was discovered consists of three sections separated by columns: a main section in the middle where Pima the preachers is in the center and two pavilions to each side. The church walls were built of hard limestone and some parts of them still exist as the church underwent more than a restoration activity as mentioned in the texts. 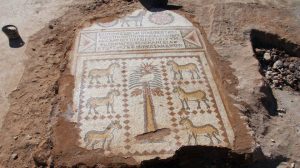 Uqeirbat archeological site was discovered three months ago after the Syrian Arab army was combing the area of Dash terrorists’ remnants where DGAM was informed about the find. Since then, the Directorate had been continuously working to uncover the mosaic which was removed and transferred to Hama National Museum.