Damascus Countryside, SANA- As a part of the continuous fabrications made by the Takfiri terrorist organizations and their sponsors to plot against the Syrian state, the so called “White Helmets” organization has circulated videos taken at one of the medical points in Douma showing what they claimed to be a chemical attack against civilians on April 7.

SANA’s camera visited the medical point that the media platforms affiliated to the terrorists claimed that the injured in the alleged chemical attack were treated, and met 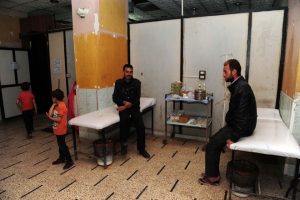 with a member of the medical staff who was there when the incident occurred.
Dr. Bara Badran a resident doctor at ER Department of Douma Hospital (also called by terrorists of Jaish al-Islam as Medical Point 1) said that on April 7, there was bombardment on the positions of terrorists in Douma who were positioned in residential buildings and a number of fires erupted.

Due to the fires, suffocation cases by dust and smoke took place, Badran said, adding that the injured were rushed to the hospital where they were treated 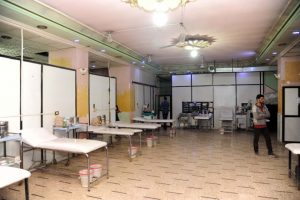 as having asthma cases and given asthma sprays and allergy shots. Within two hours, most of them were fully treated, he added.

“As the patients were duly treated, a number of strangers stormed into the hospital and started shouting ‘chemical attack’ which caused panic throughout the hospital. The strangers then watered everyone, setting off a melee and commotion, all the while trying to whip up the frenzy,” Badran said.

He pointed out that no case of poisoning or toxic substances has occurred over the past seven years he spent in the ER department at the hospital.