Damascus Countryside, SANA- As part of the efforts exerted by the Syrian government to restore normal life to the city of Douma in Eastern Ghouta after being cleared of terrorism, a medical team from Health Ministry provided vaccinations for children after being deprived of them as a result of the terrorists of “Jaish al-Islam” who confiscated medicines, vaccines and food and took civilians as human shields.

Speaking to SANA’s reporter, families of Douma expressed great satisfaction with the return of safety to their city and all the villages and towns of Al-Ghouta, stressing that the terrorists deprived their children of the various vaccines and medicines which they monopolized in their dens and destroyed most of them before getting them out to Jarabulus. 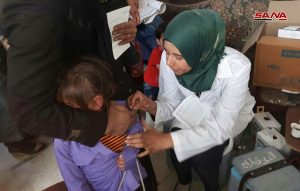 They also called for increasing the speed of activating the work of services and health institutions and public utilities in parallel with the return of security through the entry of police units and the security forces, which works to protect the people and public and private properties.

Talking about the health situation, Minister of Health Nizar Yazigi said in a press statement that the Ministry of Health has set up a mobile clinic in the city of Douma equipped with a specialized medical team to provide primary health care services to the people in the city, noting that the care includes providing vaccines for children and care of pregnant women and psychological support and reproductive health services.

For several days, medical teams from Health Directorate of Damascus Countryside have 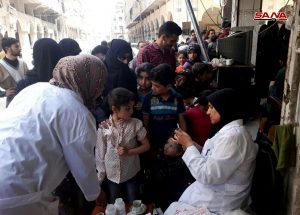 provided vaccinations for children aged between one day to 12 years, as well as supplementing the vaccinations of children.

Children were also examined to determine their vulnerability to nutritional deficiencies and to provide their families with supportive food.