Speaking to SANA’s reporter during a tour on the schools in the Ghouta’s liberated towns, Director of Damascus Countryside Education Directorate, Maher Faraj said that work is underway to rehabilitate a school in Zamalka and another one in Erbin to be opened next week. 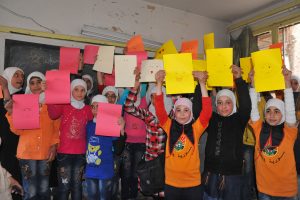 Faraj expected that the number of the students will double to over 10,000 students which requires intensified efforts of all concerned bodies to increase the number of rehabilitated schools and attract additional teaching staff.

He pointed out that textbooks of different curricula and stationery were distributed among the students in the opened schools, indicating that an intensive course for the preparatory and secondary certificates to enable them to take their exams.

The number of students in temporary housing center at al-Harjalah, al-Dwir and other centers exceeded 15,000 students.