Damascus, SANA- Damascus Chamber of Commerce and Syrian Exporters Union announced the willing to open two centers for Syrian exports (Malls) in the Iraqi capital Baghdad and the Libyan city of Benghazi during the upcoming period.

During a meeting with industrialists who want to participate in the project, Head of the Chamber, Samer al-Debs affirmed the importance of setting up the two centers in order to enable traders and consumers in Iraq and Libya to get acquainted with Syrian products and conclude agreements to supply the required quantities.

In turn, Head of the Syrian Exporters Union Mohammad al-Sawah said that the establis 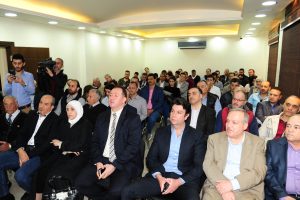 hment of the centers is supported by the government and the tendency to set up similar centers in other countries.

The center, which will be opened next August in the city of Baghdad, will have an area of 4,000 square meters and will be dedicated to the wholesale of textile and food products, as well as a warehouse to store the participants’ goods free of charge.

Al-Sawah also noted that another center for Syrian products will be opened in the Libyan city of Benghazi, calling on industrialists wishing to participate in this center or the Baghdad Center to communicate with the Chamber to identify the stages and procedures for the establishment of this center and reserve spaces.