Advisor Shaaban: Syria will expel Turkish and US occupation Damascus, SANA- Presidential Political and Media Advisor Dr. Bouthaina Shaaban said that Syria is determined to liberate all of its territory from terrorism and to expel the Turkish and US occupation.

Shaaban’s remarks came during a cultural Symposium held by Al-Quds International Foundation -Syria branch at Al-Assad National Library on the occasion of the 42nd anniversary of the Land Day. 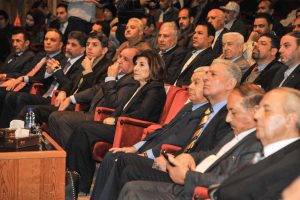 broke out in response to the Israeli occupation authorities’ announcement of a plan to expropriate thousands of land for security and settlement purposes.

The Advisor, who also is head of the board of trustees of Al-Quds Foundation – Syria branch, affirmed the importance of forming an “action unit” in all Arab countries to defend the Palestinian and Arab rights, adding that Syria’s victory over regional and international terrorism marks the beginning of a new history for the restoration of rights.

Answering journalists’ questions, Shaaban said that terrorism and Zionism are “two sides of the same coin”, indicating that the terrorism carried out in Syria has been masterminded by Zionists against the Palestinian people.

A documentary film by the Foundation was screened during the symposium.