Second batch of militants and their families exit from Jobar, Ein Tarma, Zamalka and Erbin to Idleb Damascus Countryside, SANA – The second batch of the militants who rejected the reconciliation and their families exited from Jobar, Ein Tarma, Zamalka and Erbin to Idleb on Sunday.

SANA’s correspondent at Erbin corridor on the outskirts of Eastern Ghouta said that 81 buses carrying 5435 militants and their families, among them 2107 men, 1289 women and 2039 children left through Erbin corridor to Idleb under the supervision of the Syrian Arab Red Crescent (SARC) in a similar scenario to that of Harasta on evacuating the militants and their families from the city which was accomplished last Saturday. 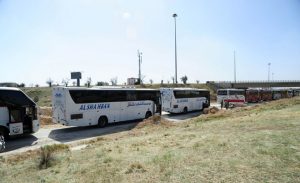 The Interior Ministry reactivated the Township center in Harasta city and spread the police patrols and special task units to consolidate security and safety and protect the popular and private properties in the city.

The correspondent added that after the exit of the militants in the morning, pillars of smoke that are visible deep in the towns of Erbin and Zamalka caused by the militants burning down their sites and dens to cover up their involvement with foreign sides.