Bogdanov: de-escalation zones should not turn into areas of foreign influence Moscow, SANA- Special Representative of the Russian President for the Middle East Affairs, Deputy Foreign Minister Mikhail Bogdanov, affirmed the need to continue the political process to resolve the crisis in Syria based on the results of Astana platform and the Syrian National Dialogue Congress in Sochi.

Bogdanov, in a press statement on the sidelines of Valdai Discussion Club, said that there is a threat to the territorial integrity of Syria, calling for not turning the de-escalation zones in Syria into areas for the influence of foreign states, including US, Turkey or other countries.

Naumkin: Russia will prevent US from carrying out its provocative schemes in Syria

In the same context, Science Director of the Institute of Oriental Studies at Russia’s Academy of Science, Vitaly Naumkin, said that Russia is working to prevent the US from 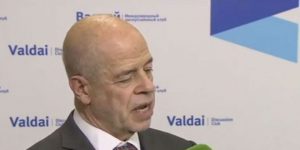 implementing its provocative plots aiming at dividing Syria as they contradict the Russian strategy, and the international laws as well.

Naumkin, in a statement to RT Channel said that the unity of the Syrian territory and its sovereignty must be preserved from foreign intervention which hinders the political solution.