Made in Syria Expo garners positive reactions from foreign visitors Syria Moda exhibition kicks off with participation of 200 local companies

Damascus, SANA- The “Made in Syria” expo for clothing, textiles, production supplies, and leather has witnessed remarkable participation by a large number of businessmen, industrialists and importers from 14 countries.

800 visitors from Libya, Egypt, Algeria, Tunisia, Sudan, and others countries came to learn about the Syrian textiles products, including men, women, and kids wear, hosiery, linen, production materials, and fabrics, with a number of them signing export contracts and registering orders with the Syrian industrialists. 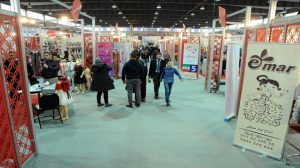 Head of the Iraqi delegation Saad Nouman Saleh said that the delegation consists of 470 tradesmen and importers, and that the large number of Iraqi participants is due to their confidence in the Syrian products which have a strong and longstanding presence in the Iraqi market, adding that Damascus International Fair formed a turning point in breaking the economic siege on Syria and contributed to the return of export thanks to successful plan set by the Syrian side for developing exports, noting that the Syrian exports to Iraq have increased largely during the past six months.

Despite the fact that Algerian tradesmen haven’t imported any Syrian goods for the past five years, today they are coordinating with the Syrian Exporters Union to reestablish trade between the two countries in the field of clothing and textile products.

“Today we have signed several contracts and deals with the Syrian tradesmen, and the orders will be shipped in a week,” said Ali al-Shebani from Libya.

Meanwhile, Hisham Raiya from Lebanon, who is one of the many businessmen who are visiting the expo for the first time, said that after what he saw at the expo he intends to visit it more in the future to sign agreements with Syrian industrialists to supply Syrian linens and cotton products to Lebanon.

“Made in Syria” expo for clothing and leather production supplies signing export contracts Syrian industrialists textiles 2018-02-17
admin
Share
Previous 100 apartments in al-Zabadani turned over to their owners after finishing repairs
Next Elderly craftsman weaves stories of history, passion and love into wondeful pieces