Damascus, SANA- An art exhibition and a musical concert for the Iranian Bayar band were among other activities held at Dar al-Assad for Culture and Arts in commemoration of the 39th anniversary of the victory of the Islamic revolution in Iran.

The event was organized by the Syrian Culture Ministry in cooperation of the Iranian Cultural Chancellery. 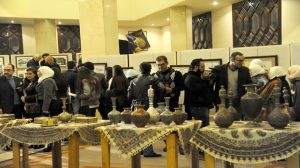 The art exhibition showcased painting works of five Iranian artists that varied between calligraphy, graphics, caricature and calligram, in addition to photographs and handicrafts which provide a gateway to the Iranian contemporary art.

The black-and-white photographs documented the various stages of the Iranian people’s struggle and precious sacrifices, in addition to new photos featuring prominent civilization and cultural monuments in Iran such as Milad Tower, the water-and-fire park, the Tabi’at (Nature) bridge and the Tehran Museum of Contemporary Art.

Assistant Culture Minister Tawfiq al-Imam delivered a speech reviewing the history of the Syrian-Iranian relations, stressing that Damascus and Tehran are the main core of the axis of resistance in the face of takfiri and US-Zionist schemes in the region. 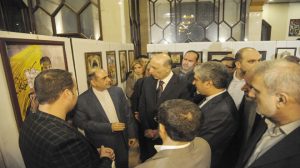 For his part, Dr.Abbas Khama Yar of the International Relations at the Islamic Culture and Relations Organization of Iran, said that Iran has witnessed significant technical and scientific progress over the past few decades despite the unjust economic sanctions and the wars waged on the country, ranking 13th in terms of science production and 7th in launching satellites.

He also highlighted the cultural achievements over the past 4 decades, especially in film industry and publishing sector.
The Iranian official called on the intellectuals and artists in Syria and Iran to mobilize all capabilities to confront the growing wave of takfiri terrorism and document its crimes as a reminder to the future generations and encourage them to preserve the archaeological monuments and heritage in the region.

In turn, Iranian Ambassador in Damascus, Javad Turk-Abadi, spoke about the mutual influence of Persian and Arab cultures
The Iranian cultural days will last till next Saturday and include artistic and cultural activities in Damascus and Lattakia.