Damascus, SANA -Speaker of the People’s Assembly Hammoudeh Sabbagh said that Syria’s top priority is the elimination of terrorism, the promotion of local reconciliation and the return of refugees to their cities and villages as well as launching the process of reconstruction.

Sabbagh remarks came during a meeting with the members of the Russian Interfaith Working Group of the Council for Cooperation with Religious Associations under the Russian President, including Department for External Church Relations (DECR) Vice-Chairman, Hieromonk Stefan Igumnov, and Chief Mufti of Moscow and Central Russia, Albir Krganov.

During the meeting , Speaker Sabbagh affirmed that Syria and Russia are partners in achieving victories over terrorism and will be partners in the reconstruction of what has been destroyed by terrorists in Syria for the good and interest of the two peoples.

Members of the delegation, in turn, hoped that security and stability would be back to Syria, affirming that the Syrian people, who have passed through the worst conditions, will rebuild Syria and that dialogue among Syrians themselves is the key to overcome this crisis.

Prime Minister Imad Khamis also met the Russian delegation, saying that the Syrian government and people highly appreciate the Russian Federation for standing by Syria in its war against the forces of extremism and terrorism. 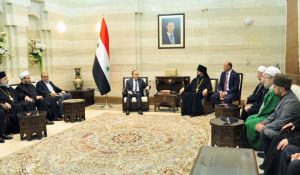 Khmais affirmed the importance of working to spread awareness among the society and youths, especially about the dangers of extremism in all its forms.

In turn, Igumnov highlighted the cooperation and coordination between Syria and Russia in the war against terrorism, stressing the solidarity of the Russian people with Syria and providing all forms of assistance to the Syrians to alleviate their suffering due to the crisis.

the delegation, affirming that Syria will continue its approach of combating terrorism in parallel with a national political process that takes place among the Syrians and the Syrian leadership and without any foreign intervention.

Speaking to journalists, Igumnov said that national dialogue and rebuilding peace in Syria are important, especially after the liberation of most of the Syrian territory from terrorism.

Later, Minister of Local Administration and Environment Hussein Makhlouf met the same delegation, saying that the Syrian State is exerting huge efforts to deal with the repercussions of the unjust war on the Syrian citizens and to deliver various kinds of humanitarian assistance to all citizens.

“We came to Syria with a large delegation of Christians and Muslims of Russia to express our solidarity with the Syrian people during the crisis,” Igumnov said, adding that “we came with important humanitarian assistance reaching more than 70 tons of various foodstuffs.”