Damascus, SANA – The People’s Assembly held on Sunday its first session for the sixth ordinary round, headed by Speaker Hammodeh Sabbagh.

The session was attended by Prime Minister Imad Khamis and a number of ministers, and during it Khamis affirmed that the government will continue providing the basic needs for citizens and improving their living conditions according to the available resources despite the exceptional circumstances.

The government has adopted a lot of economic and development steps aiming at strengthening the national economy, Khamis said.

Regarding the Administrative Reform Project launched by President Bashar al-Assad, the Prime Minister affirmed that this project aims at correcting the administrative 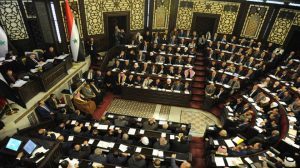 imbalance which affects government and public sector institutions, as well as restructuring and providing them with competent staff.

The MPs, in their inquiries and comments, stressed the need to give more care for the families of martyrs and the wounded, calling on the government to exert more efforts to meet the basic needs of citizens and to deal with the issue of high prices, in addition to supporting small, medium, and micro enterprises and speeding up the rehabilitation of public and private facilities.

The MPs also called for providing all the requirements of agricultural production and reducing the hours of electricity rationing, in addition to calling for being more strict in combating smuggling and corruption and to work on the reformation of the tax system and control government expenditures, affirming the need to accelerate the process of rehabilitation and restoration of infrastructure in the cities and villages to which the Syrian Arab Army restored security and stability, as well as ensuring the return of displaced persons and the completion of national reconciliations.