Three mosaic panels discovered in Hama’s countryside by the Army Hama, SANA – Three Byzantine mosaic panels were discovered inside an archaeological site during the Syrian Arab Army’s sweeping operations in the area surrounding Uqerbat town in the eastern countryside of Hama.

Speaking to SANA, Head of Antiquities and Museums Department in Hama Abdul-Qader Farzat said that the discovered site is a church floor dating back to the fifth century AD, adding that excavations started after receiving information about the existence of an archaeological site buried under the dirt in the vicinity of Uqerbat, located 85 km east of Hama city. 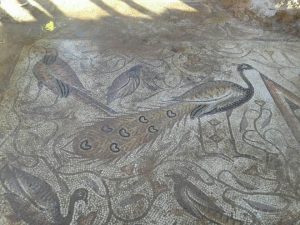 The technical and archaeological team at the site has revealed the foundations of a church in the area, in addition to the discovery of three mosaic panels with different drawings of birds, floral motifs, in addition to Greek writings.

Earlier, Hama Police Chief Maj. Gen Ashraf Taha told SANA that an army unit found a mosaic panel in the vicinity of Uqerbat town during the demining of the area in preparation for the return of the families to their villages.

He pointed out that the police forces provided the necessary protection in order to facilitate the full excavation at the site where an archaeological team is working to complete the excavation of the full panel.
On September, the Syrian Arab Army regained control over Uqerbat town after the elimination of the last terrorist gatherings in it.