Damascus, SANA – 13 Syrian children have made their way to the second stage of the “Voice Kids” show in its second edition after they stunned the audience, viewers and judges with their adorable and talented performance in the blind auditions.

The Syrian children have been chosen among other 45 children from several Arab countries to move to the next round (battle stage). 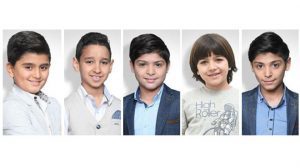 Only one Syrian talent, the 12-year old girl Ninar Dellah has chosen to join Hosny’s team.

Each coach is allowed to have 15 contestants on their teams before moving to the battle rounds which see three singers from the same team performing at the same time, with only one of them will be chosen to go through to the semi-final (sing off) in which five contestants of each team will take part .Only three contestants will be chosen to participate in the finals and the winner will be determined by the public vote.