Damascus, SANA- Speaker of the People’s Assembly Hammoudah al-Sabbagh said on Thursday that Syria’s top priority is to eliminate terrorism, enhance local reconciliations and go ahead in the reconstruction process.

Sabbagh, meeting a delegation of the Iranian Shura Council, headed by Deputy Chairman of Iran-Syria Parliamentary Friendship Association Ahmad Salek, appreciated Iran for its support to Syria during the terrorist war waged on the country.

He also denounced the threats of the US administration to Iran and its interference in its domestic affairs.

Salek, for his part, stressed the importance of confronting terrorism backed by the US, adding that his country will continue support for Syria and its people, showing Iran’s readiness to play an active role in the reconstruction phase.

In the same context, Prime Minister Imad Khamis said that Syria welcomes the participation of various Iranian economic activities in the reconstruction phase, affirming that the Iranian companies will have the priority, and all the measures have been taken to encourage them to participate in the rebuilding phase and have access to the Syrian market.

Khamis, meeting the same Iranian delegation, pointed out to the need to promote bilateral relations in the interest of the two countries. 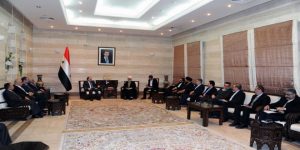 He was confident that the Iranian people’s awareness and their leadership will be able to foil any plan aimed at destabilizing their country.

Khamis stressed that the recent riots in Iran, which have been backed by the United States, the Entity of Israel and their affiliates in the region, come as a result of Iran’s positions that support the just causes of peoples, especially Palestinians.

Salek, for his part, said that a number of topics related to cultural and economic relations and intensifying visits of various activities between both countries were discussed.