President al-Assad: War on terrorism will only end when the last terrorist in Syria is eliminated Damascus, SANA – President Bashar al-Assad said that the war on terrorism will only end when the last terrorist in Syria is eliminated, affirming that significant strides have been made in the war on terror by eliminating the main hotbeds of Daesh (ISIS).

In a statement to journalists on Monday after a meeting with a Russian official and economic delegation headed by Russian Deputy Prime Minister Dmitry Rogozin, President al-Assad said that Syrian-Russian relations date back to more than six decades, and they had always emphasized the political aspect, but in the current circumstances of war emphasis focused more on the political and military aspects, which means that economic relations did not receive the due attention during past decades.

He said that during the previous visit by Rogozin, a number of priorities for improving economic relations have been set, and in the time between these two visits there have been achievements on the ground as a number of Russian companies started work on a number of projects, just as the security situation improved and the Syrian economy started to move forward.

“This visit is an opportunity to promote existing projects and the sectors in which we started work, and at the same time expanding towards new sectors that we had not set as priorities two years ago. So, the delegation today is large and diverse and covers various fields, and very important projects have been proposed for Russian investments in Syria, particularly since we started the reconstruction stage now. At the same time, we talked about heading east in our economic and cultural relations and other fields, and of course when we talking about heading east, Russia is one of the most important countries in it,” President al-Assad said.

His Excellency said that the main difference between the Geneva conference and the Sochi conference that is being worked on with the Russian friends is based on two things: first, the quality of figures or sides participating in it, as in Geneva the people with whom negotiations are held do not represent the Syrian people, and sometimes they don’t even represent themselves. Second, in Sochi there are clear issues related to the constitution and what comes after it such as elections, adding that the Sochi conference will discuss everything as there are no limits to the subjects it will tackle.

“With that, I’m talking about things that are still preliminary, so the difference between them cannot be specified until after matters are completed, but we certainly believe that anything is better than Geneva, because Geneva hasn’t achieved anything after three years,” he added. 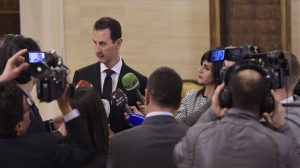 Regarding talk about the United Nations playing a role in parliamentary elections, President al-Assad said that this issue will be tackled at Sochi where the constitution will be discussed in terms of it being suitable or if it needs amendments or a new constitution, noting that when there are constitutional amendments, it is natural to have elections.

“The issue of international supervision has been proposed, and specifically a UN role has been proposed in discussions with us by various sides. We said that Syria is a founding member of the United Nations, and any UN role in the upcoming elections must be based on the UN Charter which emphasizes Syria’s sovereignty and the Syrian people’s decision. So, we’re not worried about any UN role, and we can say that we welcome any UN role as long as it respects Syrian sovereignty, as anything that impinges on this sovereignty is rejected. This should be obvious today, later, and at any time,” His Excellency said.

In response to a question about the actions of Kurds in the eastern area and their cooperation with the Americans, President al-Assad said that it’s not right to say that a Syrian group – whether ethnic or religious – has a uniform characteristic, because this makes no sense since all groups are diverse, and the various groups in Syria have the good and the bad, so talking about “Kurds” is imprecise as there are various groups in the eastern region working with foreign sides, specifically the Americans.

“This isn’t me saying that; they declare that they work under cover of the American warplanes and in coordination with them. They marketed and published photos and videos about this issue. All those who work under the command of any foreign country in their own country and against their army and people are traitors, quite simply, regardless of their names, and that is our evaluation of the groups that work for the Americans in Syria,” the President said.

He stressed that the war on terrorism isn’t over yet; it is still ongoing, but significant strides have been made in it by eliminating the main hotbeds of Daesh, which constitutes a significant victory.

President al-Assad noted that the world is focusing on Daesh alone in order to distract attention from the fact that terrorism – represented mainly by Jabhat al-Nusra – still exist and is supported by the West, so Daesh doesn’t represent the entirety of terrorism; it is just a part of it. He asserted that war on terrorism will only end when the last terrorist in Syria is eliminated, at which point there can be realistic talk of victory.

Regarding de Mistura and France holding the Syrian Arab Republic delegation responsible for the lack of progress in the most recent round of Geneva talks, the President said that it’s natural for them to do so because they don’t want to hold groups that work for them responsible, adding that these comments by France or other Western countries prove that those groups work for them, and not for the sake of Syria’s interests.

Regarding France, President al-Assad said “Since the beginning, France has been the spearhead of supporting terrorism in Syria. France’s hands are covered in Syrian blood and it has no right to evaluate any peace conference. Those who support terrorism do not have the right to talk about peace, let alone the right to interfere in the Syrian affairs. All there statements mean nothing to us and have no value.”