Homs, SANA – The ministerial committee assigned with following up on the service and development projects in Homs province on Sunday toured the eastern countryside of Homs and checked work in Raqama, Shairat, Saddad, and al-Qaryatain towns.

The committee’s chairman, Minister of Health Nizar Yaziji, said that al-Qaryatain Hospital sustained considerable damage due to attacks by terrorists, asserting that hard work is being carried out to meet people’s need and maintain schools. 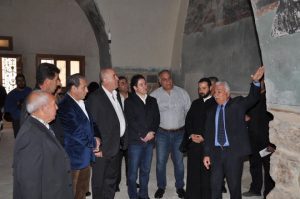 For his part, Minister of Internal Trade and Consumer Protection Abdullah al-Gharbi said that the automatic bread production plant in al-Quaryateen town is completely destroyed due to terrorist attacks, and repairing it will costs more than SYP 1 billion, affirming that it will be rebuilt along with Saddad’s plant.

In turn, Homs governor Talal al-Barazi explained that water and electricity returned to 1,200 families in al-Quaryateen and all other services will return to it progressively.